Many rivers in the United States carry the burden of having been severely polluted. Indeed all the rivers on which I have lived were once no healthier than an open sewer: the Trinity River (Dallas’s untreated sewage), the Concord River (military-industrial complex Superfund sites), the Androscoggin River (paper mills), the Charles River (“love that muddy water!”), and the Willamette River (paper mills). Although none of these rivers live up to the clean water promised by the Clean Water Act, they are nonetheless much cleaner and offer plenty of recreational opportunities, often neglected by the many people who call these watersheds home. 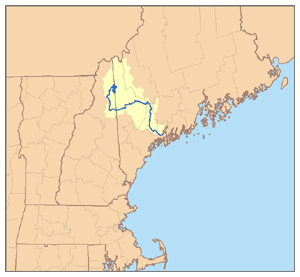 Canoeing the pristine headwaters of the Androscoggin River along the Maine-New Hampshire border was one of my fondest summer camp memories.

The trip involved several hours of driving past mill towns until we arrived at the headwaters, untouched by pollution from the mills. We saw bald eagles, moose and many other people with the same great idea. Several years later I attended Bowdoin College located near the mouth of the Androscoggin.

During the summers I studied the ecology of these waters. Although my fellow researchers and I found parts of the ecosystem degraded — like the essentially extinct Atlantic salmon population — it was nonetheless a beautiful place to work. We saw sturgeon breaching, ospreys and bald eagles overhead, and many fewer people than I had seen as a camper at the Androscoggin’s remote headwaters, despite being only a few miles from a traffic-jammed Route 1.

It turns out there is a good historical reason that I had the lower Androscoggin all to myself compared with the crowds of its headwaters. In 1941 pollution coming from upstream paper mills caused a stench in the Androscoggin in Lewiston, Maine so potent that people crossing the bridge threw up.

Parts of the river had oxygen levels close to zero, it was unable to support any fish, and foam wafted from the river into the streets — leading children to think it snowed in August.

Senator Edmund Muskie, who co-sponsored the 1972 Clean Water Act, grew up along the Androscoggin and experienced its awful pollution firsthand. To this day, the river carries the stigma of being a dirty, stinking river.

Before the Clean Water Act, the task of cleaning up rivers was largely left to individual states, which often relied on the expertise of scientists. My research on the Androscoggin focused on the post-war years leading up to the Clean Water Act when a lone chemist, Walter A. Lawrance, was appointed rivermaster by the Maine Supreme Court to clean the river. Throughout his thirty-plus year tenure, Lawrance claimed that he worked solely with scientific facts whereas concerned citizens and members of the emerging environmental movement were sometimes labeled as emotional. Many of Lawrance’s actions were clearly motivated by his background in chemistry. He dumped thousands of tons of sodium nitrate into the Androscoggin in order to prevent the creation of hydrogen sulfide which smelled like rotten eggs. Meanwhile, members of the public used the discipline of ecology to argue against Lawrance’s methods as ineffective efforts that ignored the health of the river.

Yet all of the parties frequently ignored what they held in common: the river itself and the way it shaped the debate and their actions. During the warm and smelly summer months, Lawrance stepped outside the boundaries of the chemistry lab and took daily “objective odor observations,” which involved him sniffing the air coming from the river and labeling its odor intensity and type. He correlated these odor observations with his measurements on water temperature, pollution load, and river flow. Initially his odor observations provided a good gauge of the public’s response to pollution in the river: if his odor numbers were low then so were the public complaints. 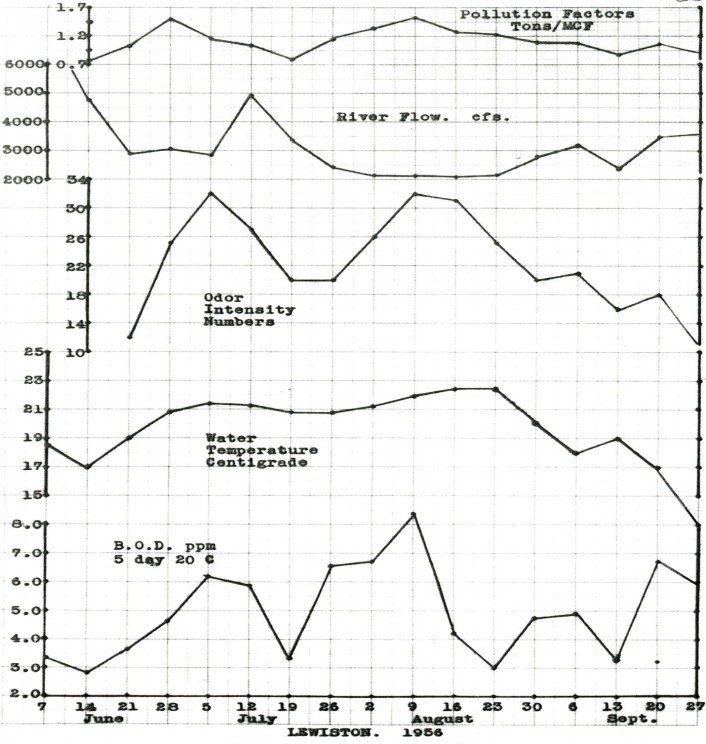 Eventually Lawrance discovered a public increasingly sensitive to river odor. In 1971 a local duck hunter summed up the value of Lawrance’s reports: “If Mr. Lawrance feels the river is improving and the smell only sporadic it must be because he is living at least five miles from the river and checking it from an airplane.”

I wonder if Lawrance made his claims of an odorless river for another reason as his role shifted and the federal government took responsibility for reducing water pollution. Maybe Lawrance wanted to reduce the Androscoggin’s stigma as an open sewer. After so many years on the water, I find it hard to believe that Lawrance had not fallen in love with the Androscoggin. He understood the value of holding one’s nose and appreciating the river as it was. To this day, parts of the river don’t meet the standards of the Clean Water Act, but this doesn’t stop events like the Androscoggin River Watershed Council’s annual Source to the Sea Trek whose goal is to foster an appreciation for the river and raise awareness about the ongoing challenges the river faces.

The environmental movement was born out of a reaction to environmental degradation amidst a growing emphasis on quality of life. Thus people fought to end the stench of rivers like the Androscoggin and demanded access to “wild” rivers like the Allagash or the Colorado for their communion with nature. Today many urban and industrial rivers are safe to swim in and even to eat certain fish such as steelhead or smelt, but they are also forgotten now that they no longer appear to interfere with the health of our communities. The only time these rivers are mentioned is in the almost nostalgic reminisces of when they used to catch fire or nauseate whole neighborhoods. If we keep imagining the rivers in our backyards as polluted catastrophes and forsake them for rivers that have always been pure then perhaps history will repeat itself, and our hometown rivers will come back to haunt our senses.

Wallace Scot McFarlane is the author of “Defining a Nuisance: Pollution, Science, and Environmental Politics on Maine’s Androscoggin River” in the journal Environmental History. He teaches fiction writing at Kings Valley Charter School and spends his weekends floating on the Willamette River.