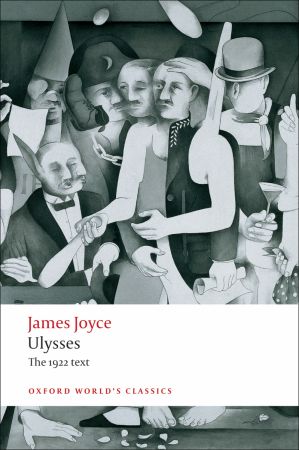 On this day in 1922, James Joyce’s Ulysses was first published in its entirety, although the publication history of the book is nearly as complex as the novel itself. Initially serialised in The Little Review from 1918, publication of Nausicaä episode led to a prosecution for obscenity and no English-speaking country dared to publish more, and risk further prosecution. However, shortly after arriving in Paris in July 1920, Joyce met Sylvia Beach, proprietor of the Shakespeare and Company bookshop and friend to modern writers. On hearing of the collapse of Joyce’s hopes of US or English publication, Sylvia Beach offered to publish the book under the auspices of Shakespeare and Company, to have it printed in Dijon by Maurice Darantiere, and to finance it by advance subscription. Joyce agreed at once. Here, we’ve picked one of our favourite extracts from the Oxford World’s Classics edition (pp.226-227).

Mr Bloom turned over idly pages of The Awful Disclosures of Maria Monk, then of Aristotle’s Masterpiece. Crooked botched print. Plates : infants cuddled in a ball in bloodred wombs like livers of slaughtered cows. Lots of them like that at this moment all over the world. All butting with their skulls to get out of it. Child born every minute somewhere.  Mrs Purefoy.

He laid both books aside and glanced at the third : Tales of the Ghetto by Leopold von Sacher Masoch.

The shopman let two volumes fall on the counter.

Onions of his breath came across the counter out of his ruined mouth. He bent to make a bundle of other books, hugged them against his unbuttoned waistcoat and bore them off behind the dingy curtain.

Mr Bloom, alone, looked at the titles. Fair Tyrants by James Lovebirch. Know the kind that is. Had it? Yes.

He opened it. Thought so.

A woman’s voice behind the dingy curtain. Listen : The man.

No: she wouldn’t like that much. Got her it once.

He read the other title : Sweets of Sin. More in her line. Let us see.

He read where his finger opened.

— All the dollarbills her husband gave her were spent in the stores on wondrous gowns and costliest fillies. For him ! For Raoul !

—  Her mouth glued on his in a voluptuous kiss while his hands felt for the opulent curves inside her deshabillé.

Yes. Take this. The end.

—  You are late, he spoke hoarsely, eying her with a suspicious glare.

The beautiful woman threw off her sabletrimmed wrap, displaying her queenly shoulders and heaving embonpoint. An imperceptible smile played round her perfect lips as she turned to him calmly.

Warmth showered gently over him, cowing his flesh. Flesh yielded amid rumpled clothes. Whites of eyes swooning up. His nostrils arched themselves for prey. Melting breast ointments (for him ! For Raoul !) Armpits’ oniony sweat. Fishgluey slime (her heaving embonpoint !). Feel ! Press ! Crished ! Sulphur dung of lions !

An elderly female, no more young, left the building of the courts of chancery, king’s bench, exchequer and common pleas having heard in the lord chancellor’s court the case in lunacy of Potterton, in the admiralty division the summons, exparte motion, of the owners of the Lady Cairns versus the owners of the barque Mona, in the court of appeal reservation of judgment in the case of Harvey versus the Ocean Accident and Guarantee Corporation.

Phlegmy coughs shook the air of the bookshop, bulging out the dingy curtains. The shopman’s uncombed grey head came out and his unshaven reddened face, coughing. He raked his throat rudely, spat phlegm on the floor. He put his boot on what he had spat, wiping his sole along it and bent, showing a rawskinned crown, scantily haired.

Mastering his troubled breath, he said :

This excerpt is taken from Ulysses: The 1922 text by James Joyce. It is edited with an introduction by Jeri Johnson, Senior Tutor at Exeter College, Oxford and appears in the Oxford World’s Classics series.