As If: Modern Enchantment and the Literary Prehistory of Virtual Reality

Sherlock Holmes could figure out almost anything, and had he bothered to discover a longevity pill he would have turned 158 years old on January 6, 2012. Or sometime during this year: Arthur Conan Doyle indicated that Holmes was born in 1854, but never divulged an exact birthday. That feat of deduction was carried out by one of the detective’s innumerable fans, Christopher Morley. Like many of them, he obsessively mined the Holmesian Canon of sixty narratives to establish both the known and unknown facts of this fictional character’s existence. 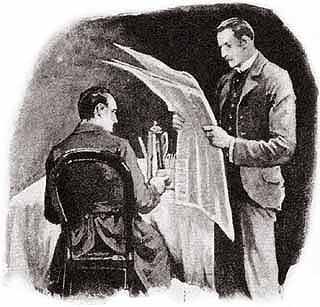 Perhaps Holmes didn’t bother to seek the grail of immortality because his creator had already discovered it. Conan Doyle’s sleuth has become one of the most famous fictional characters in literature’s history, and his popularity shows every sign of increasing, Robert Downey, Jr. notwithstanding. Holmes was the first to be the subject of “objective” biographies, complete with footnotes and other scholarly devices, as well as magazines dedicated to establishing that he was factual and Conan Doyle largely irrelevant. (For many years one fan group, the Baker Street Irregulars, identified Conan Doyle as Watson’s literary agent.) Indeed, Holmes was the first “virtual reality” character in Western literature, the model for innumerable other fictional beings and worlds that have transcended the printed page to assume an autonomous life, from The Lord of the Rings to Harry Potter.

But why Holmes? There have been many other fictional characters that have caught the public’s fancy over the course of centuries. None of them, however, commanded such a sustained and growing devotion. Falstaff, Don Quixote, Pamela, Werther, Little Nell, and others have populated the collective memory, but sober biographies of them, and societies devoted to them, are thin on the ground now and were unthinkable before Holmes’s fandom pioneered the phenomenon in the early twentieth century.

It’s a mystery, but a solvable one. We need only follow Holmes’s sage injunction to “eliminate all other factors, and the one which remains must be the truth.” Here are the relevant factors to consider in the Case of the Cerebral Celebrity:

(1) Holmes and Watson are marvelous characters, and their intimate interactions have made them the ultimate “Buddy” team.

Yes, the two are an interesting spin on the “Reese’s Peanut Butter Cup” approach to literature, which includes such opposing and delectable pairs as Don Quixote and Sancho Panza, Falstaff and Prince Hal, Boswell and Johnson, Pickwick and Sam Weller. But are Holmes and Watson demonstrably superior to their predecessors? Arguably not: all of these pairs are wonderfully unique, and it would be hard to choose among them. The “Hope & Crosby” hypothesis is a necessary but not sufficient cause to explain the Holmes phenomenon.

Ah, the “nobody-can-eat-just one” hypothesis. Certainly Conan Doyle was a gifted writer, whose creations have outlasted that of many of his contemporaries. But he didn’t pull his punches when he wrote other series characters, such as Brigadier Gerard and Professor Challenger – and few read their tales now. Despite the application of his considerable skills, Conan Doyle’s other works have not captured the popular imagination. His talents as a writer are a necessary but not sufficient explanation the Holmes phenomenon.

(3) The Holmes stories are wonderfully nostalgic evocations of London at the turn of the century, to which we long to return; as T.S. Eliot argued, “Sherlock Holmes reminds us always of the pleasant externals of nineteenth century London.”

This has long been a popular explanation for Holmes’s popularity, but if it were so, then the BBC’s modernization of the tales, “Sherlock,” would be a signal flop—and it is anything but. Vincent Starrett’s ode to Holmes, “221B,” concludes with the famous lines, “Here, though the world explode, these two survive, /And it is always eighteen ninety-five.” This is lovely, but it’s no longer a necessary or sufficient explanation.

Eliminating these accounts, what remains is Holmes himself: the singularity of his character. And in what does this consist, aside from such memorable but superficial traits as his occasional recourse to drugs, his talent at disguise, his unexpected athletic ability, his chivalry, and the mystery of his sexuality? What is the core component to Holmes, the alchemical element that has transformed him from magazine hero to global archetype?

The solution to the case is one that is neither impossible nor even improbable: Holmes made reason enchanting. In the modern age, reason is often seen to be the panacea for our ills, but it can also be the source of them. Rationality seems to “disenchant” the world, removing the elements of wonder, surprise, and purpose that allegedly characterized the “premodern” world. “The disenchantment of the world” was a much-discussed issue in the late nineteenth century, one that vexed Conan Doyle. His detective, however, re-enchanted modernity through the distinctive use of reason.

Unlike many contemporary scientists and logicians who disdained the imagination, Holmes brought reason and the imagination, logic and intuition, together in a new synthesis that he called “the scientific use of the imagination.” He made critical thinking into a romantic adventure. Through his discerning eye, every detail of modern life, from newspaper advertisements to the footsteps of a giant hound, became charged with meaning, possibility, and wonder.

This is why Holmes has become an icon for an age that enshrines science yet yearns for magic. As far as Holmes was concerned, “the world is big enough for us. No Ghosts need apply.” That’s a sentiment to celebrate, along with its source. Not knowing his exact birthdate lets us do it every day of the year.

Michael Saler is Professor of History at the University of California, Davis and is the author of As If: Modern Enchantment and the Literary Prehistory of Virtual Reality, which was recently reviewed in the Wall Street Journal.

The senses in an increasingly digital world