Pilgrimages, saints, shrines, indulgences and miracles were central to western medieval culture and religious experience.  Yet, although much has been written, what has often been overlooked by historians is the economic underpinning of medieval religious beliefs and practices.

Pilgrimage itself was founded on an implicit contract between the pilgrim and the church.  Those who embarked on a lengthy pilgrimage to one of the three great pilgrimage centres (Jerusalem, Rome and Santiago de Compostella) were making a costly commitment.  Firstly, there was the devotional journey, which might involve an absence of a year or more, and the associated expenditure on transport, food, and lodging etcetera.  Secondly, there were major risks in the form of shipwreck, disease, exhaustion and robbery.  And, finally, there were the offerings to be made to the shrine of destination as well as the other shrines en route.

In return for their commitment, pilgrims were offered two primary benefits: the possibility of miraculous intervention by the saints whose shrines were venerated, and the prospect of indulgences (remission from purgatory) according to a fixed scale sanctioned by the Pope. 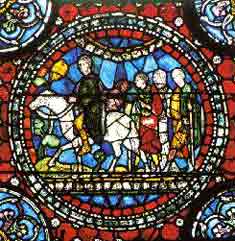 Saints worked their miracles through their bodily remains.  Since the miraculous power of a saint’s relics was as much in the parts of a body as the whole, it became common to dismember the remains and distribute separate limbs.  Similarly, the custodians of Beckett’s shrine at Canterbury were able to offer limitless ampoules of the martyr’s blood mixed with water – the efficacy of the holy solution being unaffected by dilution.  This practice allowed the (theoretically limited) supply of saintly remains to meet the growing demand for relics throughout Christendom.

While miracles catered for pilgrims’ needs on earth, indulgences offered relief in the afterlife.  According to early Christian doctrine the super-abundant merits of Christ and the saints created a “treasure” of superfluous merit, which, through the intermediation of the church, could be drawn upon to expiate the sins of the faithful.  The church distributed this treasure to willing purchasers who had received absolution.  Testators would often leave bequests for surrogate pilgrims to travel and make offerings on their behalf in the hope that indulgences would be granted to relieve their suffering in the next world.  It appears that there was a pool of “stipendiary” pilgrims available for hire to meet the demand for surrogate pilgrimage from testators and those too ill to travel.

In addition, it seems that our medieval forebears were very much aware of what we describe today as “brand management”.  Shrine managers targeted their clientele, promoted their advantages over competitors, and provided supporting evidence for miraculous claims with story collections.

Medieval pilgrimage shrines can also be viewed as a form of franchise business operating under the umbrella brand of the universal church:  the local shrine managers marketed their patron saint and took in large-scale offerings that were recycled, in varying proportions, to the clergy, church building programmes and the poor.  As franchiser, the Papacy exercised an important degree of control over the operation of franchisees and the use of its umbrella brand, while preventing competition from unauthorised sources.  This was achieved through the papal monopoly on the creation of saints, the Pope’s discretionary powers relating to indulgences and, less successfully, through the validation of miracles and relics.

In this business model, the shrine was a profit centre and the shrine custodians (local churches or abbeys) benefited directly as franchisees, since they had discretion over the use of the offerings they received.  A typical split might be one third to the clergy, one third to building maintenance and one third to the poor.  The Papacy on the other hand was not, in the early medieval period, entitled to any share of the receipts of churches outside Rome itself.  The value of the franchise to the Pope lay in the fact that the shrine network supported the wider church’s financial needs while strengthening and extending the devotion of the Christian faithful.  However, in the 14th and 15th centuries the Papacy began to exploit indulgences as a source of revenue: a great shrine wishing to apply for a plenary indulgence could expect to pay an upfront fee and a percentage of the proceeds.

It was the task of shrine custodians to promote pilgrimage offerings by marketing their patron saints.  The most effective way for a shrine to strengthen its competitive position was to proclaim the superior efficacy of its spiritual services in the form of miracles and indulgences.  For example, Canterbury became associated with a stream of miracles after the martyrdom of Beckett in 1170, provoking St Cuthbert to respond by performing a sudden spate of miracles at his rival shrine in Durham.  Reading Abbey, another contending shrine whose prime relic was the hand of St James, reacted to the competitive threat from Canterbury in a similar manner.  In one of Reading’s 12th century miracle stories, a girl who went to Canterbury to obtain a cure for her wasting illness was confronted in a dream by St James.  The apostle told her “You will certainly not receive a cure here but go to Reading, to my monastery, and there you will be healed” – a promise that was duly fulfilled when the girl abandoned Canterbury in favour of Reading.

Adrian R. Bell is Professor in the History of Finance at the ICMA Centre, Henley Business School, University of Reading. Adrian has recently completed a major Economic and Social Research Council-funded project (together with Professor Chris Brooks), Credit Finance in the Middle Ages: Loans to the English Crown c. 1272–1340. He has published widely in this area in academic journals such as the Journal of Banking and Finance, Explorations in Economic History, Journal of Medieval History and History and has a jointly authored book, The English Wool Market c. 1230-1327 (2007).

Richard S. Dale is Professor Emeritus of International Banking at the University of Southampton and Visiting Professor of Financial Regulation at the ICMA Centre, Henley Business School, University of Reading. He has published widely in academic journals such as the Economic History Review and his recent books include ‘Napolean is Dead’: Lord Cochrane and the Great Stock Exchange Scandal (2006), The First Crash: Lessons from the South Sea Bubble (2004) and Who Killed Sir Walter Ralegh? (2011).

Bell and Dale’s paper, The Medieval Pilgrimage Business, has been made publicly available by the journal Enterprise and Society. You can read it in full and for free here.

Letters from the Antebellum