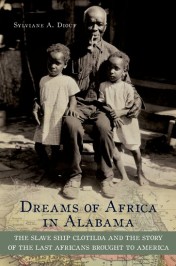 Dreams of Africa in Alabama: The Slave Ship Clotilda and the Story of the Last Africans Brought to America

My first thought upon picking up this book was, “why haven’t I heard this story before?” Incredibly, the year before the Civil War broke out and more than fifty years after the United States legally abolished the international slave trade, the last shipment of slaves were brought ashore under the cover of night. After the war, these brief-slaves settled in Alabama, founding a settlement still inhabited today by their ancestors. Sylviane A. Diouf, the author of Dreams of Africa in Alabama: The Slave Ship Clotilda and the Story of the Last Africans Brought to America, tells the stories of these West Africans forced to become Americans. Below is an excerpt from the introduction.

On a January night in 2002, a truck backed up to a statue in front of Union Missionary Baptist Church, north of Mobile, Alabama.

One or two people got out, cut through parts of the heavy bronze bust, ripped it from its brick base, and disappeared with their loot. The theft shocked and angered the congregation of pastor A. J. Crawford, Sr. They had just celebrated the New Year and were preparing to commemorate, the following month, the 130th anniversary of the church. Unlike those of the Virgin Mary or George Washington, this statue was the only one of its kind in the country. The theft struck at the very core of a community that will never have any equivalent in North America. Determined to bring the statue back home, the congregation established a reward fund. In case the bust was not found, the money would be used to cast a new one. The wooden model, carved fifty years earlier, was still in town.

The statue dated back to 1959, when a steel shaft was sunk 100 feet into the earth in front of the church, to commemorate the one hundred years that had passed since the honored man and his companions had set foot on Alabama soil. The bust and the shaft were the symbols of an exceptional tale. In the summer of 1860, less than a year before the outbreak of the Civil War, one hundred and ten young men, women, and children were brought to the Alabama River, north of Mobile. They had just spent six weeks onboard the Clotilda, a fast schooner that had brought them from a world away. They were the last recorded group of captive Africans brought to the United States. Acting for Timothy Meaher, one of the most prominent businessmen in Mobile, Captain William Foster had smuggled them in under cover of night. He had to be careful because decades earlier, on January 1, 1808, the country had abolished the international slave trade. Although tens of thousands of Africans had since landed, the slavers could, in theory, be hanged.

After emancipation, the young people tried to get back home but, unable to do so, they eventually bought land and founded their own town. One of their first major enterprises was the construction of a church. Cudjo Lewis used to ring the bell. One hundred and thirty years later, it was his bronze bust that was stolen from in front of the brick building that had replaced the white clapboard church erected by the men and women of the Clotilda. Cudjo did not belong to a distant past: he lived through World War I, Garvey’s Back to Africa Movement, the Great Migration, and the Great Depression. He died in 1935, the last survivor of the last slave ship.

Cudjo and his companions were part of a tiny group of people born in Africa who witnessed the Civil War, Reconstruction, and the early decades of the twentieth century. To these men and women in their eighties and nineties living in the Jim Crow South, the Middle Passage was still a painfully vivid memory.

They have been all but forgotten today, but those who arrived on the Clotilda have also been denied. Their very existence was disregarded by President James Buchanan, who assured the country that the last slave ship had landed in 1858. W. E. B. Du Bois did not include their voyage in his celebrated book The Suppression of the African Slave-Trade. Warren S. Howard and Hugh Thomas dismissed it as a hoax in their extensive studies of the transatlantic slave trade. And up to the present day, historians and writers tout the Wanderer as the last slave ship to the United States, even though her trip had ended eighteen months earlier than the Clotilda’s.

If the date of their awful journey has been contested or even refuted, more importantly, these Africans’ singular experience has not generated much attention, although they realized more in America than many other groups of immigrants. In the heart of the Deep South, in Plateau and Magazine Point, three miles north of Mobile, they created a small town, the first continuously controlled by blacks, the only one run by Africans. And unlike most post-Reconstruction black settlements, theirs has endured, and is home to hundreds of their descendants, who, in turn, form the only African American community whose members can all identify their African ancestors.

Their story started in West Africa, in the Bight of Benin, a region known, ominously, as the Slave Coast. From small towns in the countries that are today Benin and Nigeria, young adults, teenagers, and children were brought to the coast and locked up in a slave pen, a barracoon, in Ouidah. They had names like Kossola, Abache, Abile, Omolabi, Kupollee, Kêhounco, and Arzuma. They were farmers, fishermen, and traders; they followed Islam, Vodun, or the Orisa. Some had been married, others were too young to have gone through initiation.

The largest group was made up of prisoners of war captured by the Dahomian army during a dawn attack on their town. The rest of their companions were victims of kidnappings or slave raids. They spoke various languages, had lived in different parts of the region, and had different cultures and experiences. But in the barracoon and on the Clotilda, they created a strong, tight-knit community.

The man at the origin of their dreadful journey, Timothy Meaher, owned a plantation and, with his brothers James and Burns, a shipyard and several steamers. As some people in the South were agitating for the reopening of the international slave trade, he had bet a large sum that he could bring “a shipful of niggers” to Mobile and not be caught. His accomplice in the scheme, William Foster, was the builder of the Clotilda. With his schooner disguised as an innocuous cargo ship, Foster sailed to Ouidah in March 1860. There, in a barracoon near the beach, he selected nineteen-year-old Kossola—who became Cudjo Lewis; Kêhounco, a young girl who had been kidnapped; Arzuma, a Muslim woman from the North; and dozens of their companions.

Brought to America and enslaved for almost five years on plantations and steamboats, the young Africans formed a bloc, distinct from everyone else, and ready to stand up forcefully to anybody, white or black, they perceived as a threat. Once free again, they regrouped, and put their energy into finding a way to go back to their families in Africa. When their plan failed, they decided to do the next best thing: recreate Africa where they were. They shared all they had, saved money, built each other’s houses, and solved problems collectively. Despite the hardships, their sense of unity and kinship made their “African Town” a success. Conversing in a common West African language, they ruled their settlement according to their laws. Gumpa, a nobleman from Dahomey who had fallen from grace, was their chief; and they appointed two young men to be their judges.

Within this African enclave, they raised their children, teaching them the languages and values they had learned from their families and brought from the homelands they cherished. Long after their deportation, they still hoped the interviews they gave to curious strangers would somehow get word to their relatives that they were still alive.

In the summer of 1928, Zora Neale Hurston spent two months gathering detailed information from Cudjo Lewis for a book. He told her about his youth and capture, the Middle Passage, enslavement, and life in African Town. Hurston finished the last draft of her manuscript, titled Barracoon, in April 1931. She had produced an invaluable document on the lives of a group of people with a unique experience in American history. She sent it to publishers, but it never found a taker, and has still not been published.

From what Abache, Cudjo, and the others said to outsiders and to their own children and grandchildren, from court documents, and from photographs, a clear enough picture of their lives, with a few shady spots, has emerged. Very little of the experience of Africans deported to and enslaved in the West has come to light, and it has generally been through the autobiographies or biographies of a handful of successful men such as Olaudah Equiano, Ottobah Cugoano, or Venture Smith. Next to nothing is known about the lives and aspirations of ordinary people, particularly of women. But precious information can be found in the Clotilda Africans’ own words, those of the Americans who met them or lived among them, and the words of their descendants.

Their legacy has endured. Thousands of their descendants now reside all over the country, but know that African Town, now called Africatown, is their homeplace. Many, in the fifth generation, still live on the land their ancestors bought and developed, their sturdy houses having replaced the founders’ wooden homes. But what has not changed is their sense of being “different” and their determination to preserve a peculiar heritage…

They had the same dream as twelve and a half million Africans sent against their will to the Americas: returning home to their families. Like almost all of them, they did not realize it. But they tried to recreate their own Africa on the soil of Alabama.

Editor’s Note on Comments: In order to protect the safety of readers and commenters, please do not leave personal contact information in the comments. If you wish to be contacted, please leave an email — not your personal home address or telephone number.

Sylviane A. Diouf is an award-winning author of books on African and African diaspora history and culture. She has taught at Libreville University and New York University and is currently a curator at the Schomburg Center for Research in Black Culture in New York. She is the author of Dreams of Africa in Alabama: The Slave Ship Clotilda and the Story of the Last Africans Brought to America.