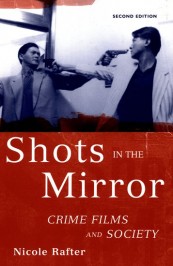 Shots in the Mirror: Crime Films and Society

For movie-makers and viewers alike, sex-crime movies offer opportunities to explore the meanings of sexual offenses and to reflect on the boundaries that societies trace between illicit and illegal sexual behaviors. Even if we don’t all actually debate the fine points of such films with friends, merely by viewing sex-crime movies along with millions of other people across the globe we become participants in transnational conversations.

These conversations are really discussions of such troublesome issues as what behaviors should be criminalized, whether sex offenders are criminally responsible or mentally ill, how we define who the victims are, and when we should give justice officials special latitude in the investigation and prosecution of hard-to-detect and difficult-to-prove offenses. The best sex-crime films–those that grapple with the thorniest issues and take positions on them–pose such questions and frame the debates on how they should be answered.

Recent years have seen the release of a number of thoughtful sex-crimes films, and the trend seems to be accelerating. It began with The Accused (1988), the Jodie Foster film about the real-life “Big Dan” poolhall-table rape case. The Accused focused on two problems: Is it fair to charge guys with rape when the victim entered the poolhall of her own free will and danced in a way they considered provocative? And should the on-lookers who cheered on the gang-bangers be tried as accomplices? In short, the film, like the actual case, debated the very definition of rape.

Another early sign of the trend was Dolores Claiborne (1995), starring Kathy Bates in a drama about incest. Dolores, a stony-faced woman, lives on a Maine island as a social outcast, shunned due to neighbors’ suspicions that years earlier, she had killed her husband. Exoneration comes when her sullen daughter (Jennifer Jason Lee) realizes that Dolores fought (and killed) the father to protect the her from sexual abuse. Dolores Claiborne, one of the first movies to explore the impact of incest, recognizes that a child’s caretaker, too, can be victimized by sexual abuse, even if she or he is not the offender’s target.

After these two harbingers, the pace picked up with the release of Happiness (1998) and L.I.E. (2001), both of which deal explicitly with pedophilia. In quick succession, they were followed by Pedro Almodovar’s Talk to Her (2001), a film that daringly paints a sympathetic portrait of a male nurse who impregnates a comatose patient. The year 2003 brought four more sex-crimes films: In the Cut, about a woman’s refusal to let threats of sexual violence in her neighborhood deter her quest for sexual authenticity; Monster, about Aileen Wuornos, the Florida prostitute who was sexually abused as a child and grew up to kill a number of customers, for which she received the death penalty; the documentary: Capturing the Friedmans about memory and the impact of pedophilia on a family; and Mystic River, about ways the fallout from pedophilia can ripple across generations. Another two sex-crime films were released in 2004: The Woodsman, Kevin Bacon’s harrowing portrayal of a pedophile, recently released from prison and trying to go straight; and Bad Education, an Almodovar film concerned with a priest’s sexual abuse of young boys.

Although there were fewer sex-crime films in earlier years, such movies did exist, and in fact, they have a long and distinguished history. One of the first was Alfred Hitchcock’s The Lodger (1927), a silent movie about a serial killer who is attacking Hitchcock’s favorite type of victim: young, female, and blonde. A few years later, Fritz Lang released M (1931), one of the best sex-crime films of all time. (The initial stands for “murderer.”) M’s obsessive child stalker, a character based in part on the real-life “Dusseldorf vampire,” established an enduring stereotype of the sex psychopath, driven by impulses far beyond his control.

But then there was a long gap, perhaps a result of the relatively conventional, straight-laced temper of the 1940s and 1950s. Not until Psycho (1960) did the sex-crime film revive. The same year saw the release of Peeping Tom, another psychosexual study that implicates both the director and the viewers in sadomasochistic voyeurism. Equally chilling (if less psychologically intricate) was Cape Fear (1962), the story of an ex-con openly planning to rape the young daughter of the lawyer who testified against him years earlier in a rape trial. With The Boston Strangler (1968), a movie based on the actual criminal career of a man with a split personality, the sex-crime film returned to the mental illness interpretation suggested by M and Psycho, assuring viewers that such aberrant personalities belong in psychiatric wards, not prisons.

The 1970s brought two more sex-crime films: 10 Rillington Place, based on the predations of a real-life serial killer; and Murmur of the Heart, a Louis Malle film that deals cheerfully with (among other themes) mother-son incest. (In fact, this film may not belong in the sex-crime film category at all, since the director does not view the incest as a crime.) Only one sex-crime film, Al Pacino’s controversial, gay-themed Cruising, appeared during the 1980s.

In Shots in the Mirror, I suggest reasons for the recent surge in sex-crime films. Earlier taboos against the depiction of sexual deviance have relaxed, and today’s audiences are more likely to find material of interest in stories that earlier seemed merely distasteful. The women’s movement of the 1970s and 1980s demonstrated that sexual violence is widespread, especially among intimates. Allegations of sexual abuse in daycare centers (false allegations, as it turned out) woke people up to the possibility of sex crime against children by trusted adults; those charges also stimulated debate over legal issues such as whether children should be allowed to testify in court. The unmasking of religious leaders as pedophiles pushed public awareness up another notch, as did infamous individual cases including that of the child victim Megan Kanka and the cannibalistic offender Jeffrey Dahmer. As issues of sex crime moved to fore of public consciousness, they inevitably became the focus of movies.

It’s not always easy to decide what to include in the sex-crime films category. I myself exclude teen terror flicks, even though many of them (such as Slumber Party Massacre [1982]) have a strong element of sexual victimization. I also exclude films whose main aim is pornographic. But there is a lot of room for debate. Should we include Crash (2004), with its prominent scene of groping by a police officer, or would it be better to categorize Crash as a movie about race and identity? What about Blue Velvet (1986), in which the emphasis falls more on perversity and voyeurism than sex-crime? And should we include comic sex-crime films such as Hitchcock’s Frenzy (1972) or Almodovar’s Matador (1986) in the category? I’d like to learn readers’ opinions on this matter.

I’d also like to hear from readers who know of feature-length sex-crime films that I’ve missed here.

Nicole Rafter is the author of Shots in the Mirror: Crime Films and Society; a socio-cultural study of the crime film genre. She is currently a professor at Northeastern University in the Law, Policy, and Society program. Her OUP column is published on the 4th Tuesday of every month.